It's been exactly two months since the day my Desktop Picasa app stopped connecting to my Google account. The secret handshakes no longer worked. The known tricks for appending URLs were useless. Whether I was ready to or not, I had to move on.

Transitioning to a new system required a huge shift in thinking, mostly with respect to my online album sharing. Picasa Desktop had allowed me to organize into folders by date and location. (As frequent travellers, we mostly cared about photos at the "Where were we?" level of organization.) Then, within that structure, I could selectively choose which photos per album would be mirrored and available online for public viewing.

But, now that my local laptop folders couldn't simply be mirrored through Picasa Desktop as Picasa Web Albums, I had to switch to thinking about creating actual online albums separate from thinking about the folders on my machine. 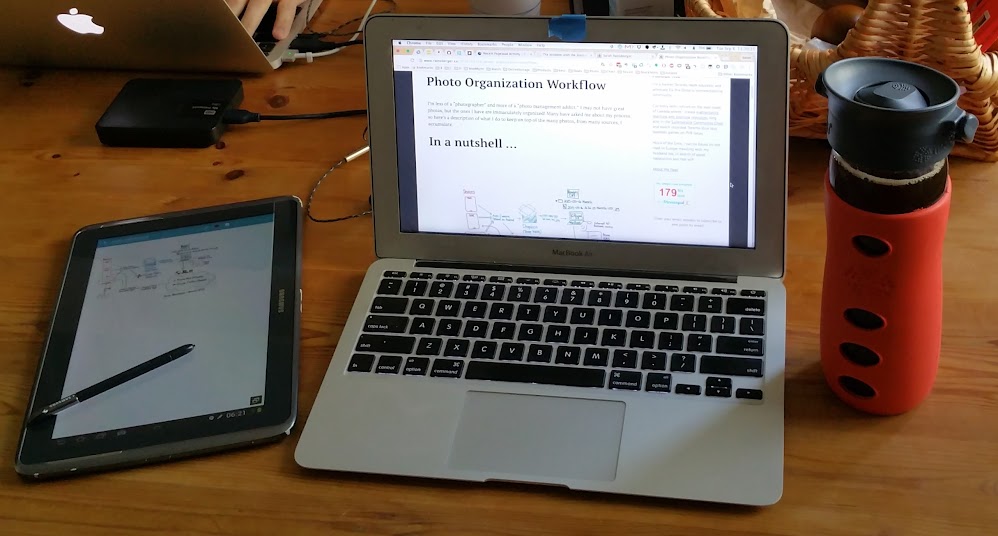 My basic workflow remains similar to the process described in my previous photo organization workflow post, with some notable changes now that Picasa Web Albums no longer exist.

What happens when I take a photo on my phone?

Here's my step-by-step procedure for creating and maintaining my online photo albums in Google Photos. It's still a work in progress, and has become a little more involved now that I have Joe contributing some of his photos to my albums, too.

1... Culling: I first use a Gallery app (built-in Gallery, or Piktures) to go through new photos taken and delete any obviously bad ones, or chose favourites among duplicates and discard the rest. I've learned that it's a lot easier to manage photos on my device first, before they get uploaded to cloud services. And, the fewer there are, the easier it is to manage them!

2... Google Photos manual backup only: I have decided to disable Google Photos' auto backup, although I do regularly back up all my photos there. One reason to do so is that opening up Photos will show you a cloud with a line through it symbol for all the new photos that have not yet been uploaded, and this is very helpful for knowing which photos have/haven't been organized yet. Because I want all my uploaded photos to end up in at least one album (further explained below), not just in the big shoe box that is the uploaded stream of photos, I can see at a glance which photos I haven't yet placed in an album.

3... Add to a public Google Photos albums directly From the "not yet backed up" photos, I select the ones I want to be in a publicly visible album (usually not all of them) and "upload to album" choosing my current, public album. For example, right now that album is "2016-09 Sweden" but next week, I'll create "2016-10 Milan." Note: You don't have to back up photos first; you can simply "add to album" and, by virtue of the fact they've been uploaded to Google Photos, they are now, in fact, "backed up."

4... Add to a private Google Photos album directly Now, I go back to my list of photos and some will still have the "not uploaded" cloud icon in and among the stream of photos. I select ALL photos from the starting point of the "not yet uploaded" photos (including the ones that I just added to a public album) and upload them to my current PRIVATE album (in this case, "Fall on the road") to ensure that every photo is uploaded into at least one album. The photos shared publicly are only uploaded once, but they exist in two different albums.

5... DropBox auto upload: In the mean time, all my photos, at full size, are uploaded via DropBox auto camera upload. Dropbox is a sneaky little thing, and no matter how quickly I manage to delete a photo locally, it seems it always gets uploaded to Dropbox. But, unlike Google Photos, there isn't a nice way to see which ones have or haven't uploaded if you disable the automatic upload. Furthermore, these files will only end up on my local machine, and are not the ones used in public albums, so I don't have to think about which ones exist where. So, although it means I do have to go through these files separately and once again delete the ones I don't want to keep, it seems to be the lesser evil of that or constantly disabling/enabling DropBox's auto backup. This camera uploads folder is linked to my laptop, and eventually, these photos will show up as local files on my machine.

At this point, each photo exists on

Organizing Local Photos on my Machine

Now, I have the original DropBox copy of the photo on my machine, a backup on the home NAS and a backup on an external hard drive. This is in addtion to the original file still on my phone.

(Note: Since I have shared access to Joe's Camera Uploads folder on DropBox, I also include any of Joe's cell phone photos in my local photos.)

Viewing and Sharing my photos

Google Photos is my primary photo sharing tool. Most of my family uses Android, so they all have Google accounts and this is the easiest way for family to keep up with our travel photos.

Albums intended to be public

Albums intended to be private

Integrating Photos Taken on my Camera

In order to give me some extra uploading and editing flexibility, I use a micro SD card in an SD adaptor in my Nikon Coolpix P900 camera. This means that I can insert the card directly into my Samsung Galaxy Note tablet's micro SD card slot and access my camera photos as if they were taken on a mobile phone. Then, I can upload to Google Photos in the same way I would from my phone. If I wanted to, I could also have these photos upload to DropBox and then process them on my laptop by moving them out of my Camera Uploads folder into local folders, renaming them in the process.

But, Nikon's importing software for Mac OS is actually pretty nice. After initial set up, it's essentially a one-click import, rename and choose destination folder. And, especially if I'm somewhere with poor network speeds or connectivity, then uploading to DropBox simply to redownload from DropBox can be painfully slow. So, lately I have tended instead to import my camera photos directly to a folder watched by the Google Photos Uploader for Mac. Once the photos in that folder have uploaded, I move them into the appropriate local folder in my "Pictures" directory.

In both cases, I can fully integrate my camera photos with my mobile phone photos both online in Google Photos and locally in my file system.

Synching All Photos Locally on my Mobile Devices

The final step is to make all (and, I do mean all) my photos available for offline viewing on my phone. This is where my third-party Android apps, and consequently, all the extra albums in Google Photos, come into play.

The app Picasa Tool (now called "Tool for Google Photos") is an exceptionally reliable offline sync for previously Picasa, now Google Photos albums. This app has downloaded tens of thousands of photos in hundreds of albums without fail, and all are available to view offline. Not only can I then view my entire photo collection without using any data, but also I have access to these photos when I'm offline. Picasa Tool downloads and stores low res versions of the photos, but they are perfectly fine for viewing and looking up past events.

My system is similar to my old system, except that now I think of, and manage, my online photos completely separately from my local photos: 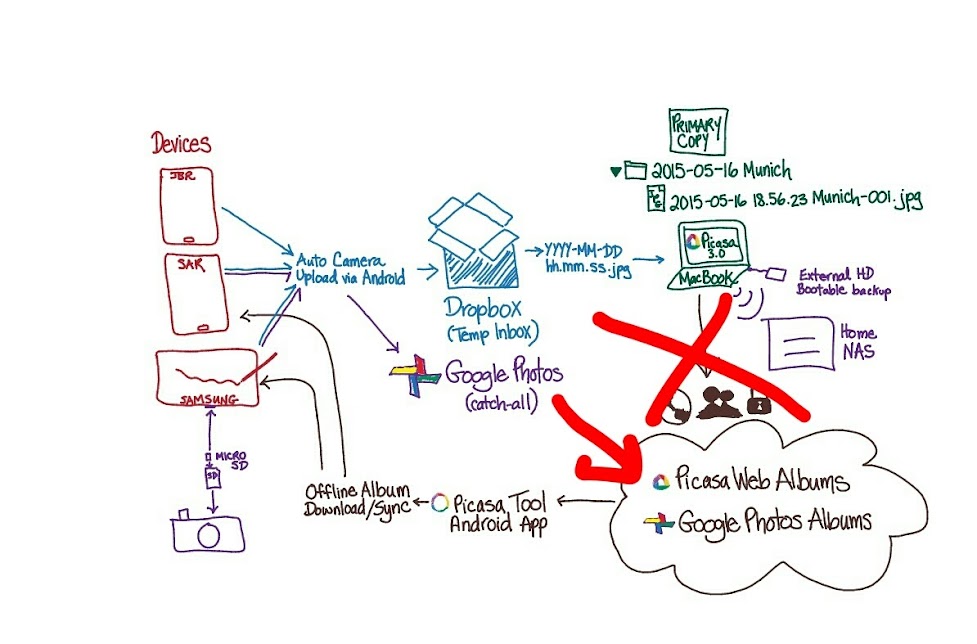 Now, there is no direct link between the primary copy of photos on my laptop and my online albums. My online system is my online system, and separately, copies of the original files are stored locally on my machine, and the NAS.

With credit/thanks/apologies to Tim Minchin:

This is my photo management system

It's where I spend a vast majority of my time

It's not perfect, but it's mine